In Shakespeare’s Comedies: A Very Short Introduction, Bart van Es briefly discusses Samuel Johnson’s gripe with what Es calls “the apparent lack of utility to the comedies.” Johnson wrote that Shakespeare “omits opportunities of instructing and delighting which the train of his story seems to force upon him” and that “he carries his persons indifferently through right and wrong, and at the close dismisses them without further care” (81).

Johnson’s claim is that the Bard’s comedies lack a “moral purpose,” as exhibited by how his characters range through the story without due care as to their words and actions, and that Shakespeare himself does not use his power as the playwright to direct his characters to some fitting, instructive end. In this way the Bard seems to be relinquishing his Godlike role; there seems to be no intelligent design. This struck me immediately and caused me to ask: Why does literature have to have a moral purpose? Do art and literature need to instruct their audience and readers in morality in order to be considered “art” and “literature”? Leading to the big question: What is the purpose of art and literature? 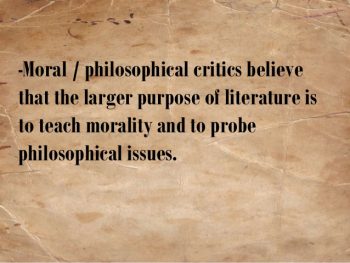 This debate somehow lodged itself in my consciousness at some point long ago and I never noticed it until I came upon the above passage. I have often said to myself I hope I enjoy this book and get something out of it in recent years since my love for literature has changed because I’m no longer engaged in the classics as a student or a professor. And this strikes at the heart of how I was taught to read and interpret fiction and poetry: that true literature (the classics) has something to teach us. But is this the case? Should it be?

Shakespeare is noted for what Harold Bloom calls “the invention of the human.” It is why I love Hamlet so much; to me he is real, he is natural and human; he is a deep thinker as I am and so I relate to him quite passionately. His life ends tragically because his thoughts and will direct his actions toward that end; the Bard cannot stop the living, breathing force that Hamlet is from finding his end in death.

In the years since I’ve stopped being a disciple and teacher of literature I have read continuously but no longer live under the illusion that literature need educate us morally, and provide us with a set of ethics to live by. For me, what makes literature so powerful, so necessary, is not the rote didacticism of a moral purpose illuminated through characters coming to good or bad ends as we find in the lengthy Victorian novels of the mid-nineteenth century but the representations of human beings in the very real world we all live in every day.

Although it took me more years than I can remember to understand why Edna in The Awakening was so revelatory to me at seventeen (I was too consumed by the song of the sea when I first read the novel and for long after to dive any deeper into why she spoke so strongly to me) I have known for a while now that it is because she is human, just as Hamlet is, just as Mick Kelly (in The Heart Is a Lonely Hunter) is, and this is the fundamental ingredient of all “classic” literature, literature that can capture a reader’s attention and keep it long after they’ve finished reading.

I do not think art or literature should have to impart morals or an ethical code of conduct to the human race; that is the duty of the family, the first institution through which we encounter the world in miniature; it is the function of the education system, and since there is no dearth of moral literature, by all means schools should utilize it to get students to debate the morals that these literary texts engage in questioning and illustrating through their characters and their deeds. I would also say that educating humankind in morality and ethics is the task of our religious institutions, but these have failed us quite miserably since their early childhood, if you will, and in their crippled old age have yet to explicitly acknowledge, let alone see, the damage they have done throughout history. And as for our political institutions, well there is absolutely no morality there, as there is no morality in our cult of celebrity. But I digress.

Although I read genre fiction for a living, I cannot say I am a fan because it does not serve much of a purpose (at lease not to me) beyond that of telling a story that readers can pass their free time reading for pleasure, not giving much thought to the philosophical questions of life; genre fiction is escapist to me. Romance is for the fantasy of the ideal lover, and mysteries for the whodunit?; sci-fi and fantasy come closer to asking the deep underlying questions concerning humanity and the universe, and so I more readily appreciate them, but still find genre fiction characters to be just that—characters, they have little dimensionality; I do not find them to be real, to be human.

Literature need not (and really, should not) be morally didactic or heavy-handed in how it tells its tale, but it must hold a mirror up to nature and show us to ourselves. Literature must explore the world and the human condition; its reflection of human nature should be so clear and honest that it leaves no question as to its true purpose, which is to instill in us a true experience of what it means to be human. What enamored me about The Hours and A Single Man when I read them a few years ago was that Cunningham and Isherwood created human beings and let them live. Their actions had consequences, in the past and the present, and on into the future that we do not get to see, but which do not seem to be directed by the authors. These are human beings who think, feel, and act as other humans do and so captivate readers because they are so ordinary, so human.

I want literature to bring me to ecstasy, to make me feel for the humans in the fiction I read. I want the literature I read to have human beings in it who face the world in all its overwhelming chaos and almost drown in it. I want them to be relatable through their humanness. I want to smell and taste their lust; be blinded by the love they are so stupidly in; I want to be empathetic to their existential terror and angst; I want to be devoured by the hate that has consumed them; I want to be as clueless as they are, groping their way through their lives because they have no foundation, no belief in anything to guide them; I want the terror of the emptiness of the indifferent universe that we confront in the denouement of King Lear, and the freedom of truly living one’s life although it is enacted in taking that very life at the end of The Awakening. I want everything that leaves me feeling, dripping with emotion, leaves me dumbfounded, and at a loss, for loss seems to be the theme of my life and I want to know that I am not alone in that experience, even if I only find others to relate to in this way in the pages of a work of literature. I want the visceral nature of human experience to flow through literature, to be the foundation and message of art, for what is the value of art and literature if they do not reveal the human condition and help us to question not just ourselves but also other people, society and culture, and the universe?

In the end, an explicit moral purpose as the goal of art and literature is unnatural; it is an artifice that the author or creator has contrived and wrongly serves as the work’s raison d’être, rather than the work being its own reason for existing, and in this the writer or artist has shirked their responsibility to the true purpose of art, which is to make us think, feel, and question, and to lay bare the human spirit and its universal condition, thereby connecting us to other humans, past, present, and future, real and fictional, and showing us that, even though it so often seems so, we are not alone. It is this that I learned when I so desperately needed to from Edna and Mick in my senior year in high school, and this that I have held on to as the undying value of art and literature: its exhibition of our humanity to ourselves, and that this humanity is beautiful and natural in all its forms. To understand this, to feel this, in the very depths of our being is to embrace and know our humanity, to transcend in an ecstatic experience of that humanity and reach the divine.

One Response to “On the Moral Purpose of Literature”