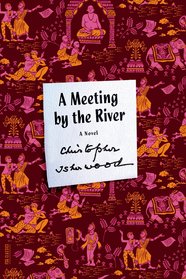 A Meeting by the River is Isherwood’s final novel, published in 1967. It is the story of two English brothers who have not seen each other in several years. Oliver is the idealistic younger brother living in a monastery on the Ganges in India readying himself for sannyas, the final vows to be taken before becoming a swami. Patrick is a publisher living in London, and is married with two children and a younger male lover in California. The novel is written in epistolary form and diary entries are interspersed with the letters.

Patrick goes to stay with Oliver early in the year to try to convince him not to take his final vows and renounce the world, including his family. The novel begins with Oliver writing to Patrick, and Patrick replying, and then the rest of the letters are between Patrick and their mother, Patrick and his wife, Penelope, in whom Oliver was romantically interested long before, and between Patrick and his lover, Tom. Oliver writes the diary entries that not only disclose the events transpiring in the monastery between him and Patrick, but also between Patrick and the swamis with whom he becomes acquainted. The letters and diary entries reveal truths and lies (at times you wonder who is telling the truth, and who is lying, not just to himself, and why), and expose the self-questioning that goes on not only in the private space of a diary but also in the domestic narrative of letter writing. We never hear from their mother, Penelope, or Tom directly in letters of their own, and only get hints at what they may have actually written through Patrick’s references to their queries.

I enjoyed this novel not just because of the natural ease with which Isherwood seems to effortlessly write narrative fiction but because I have always been a fan of Anglo-Indian literature, am a strong believer in Hindu doctrine, and being gay, found Patrick’s “homosexual” behavior of interest, and have been thoroughly concerned with the dichotomy between sexuality (desire) and spirituality since my early days studying Eastern philosophy and Christianity almost twenty years ago.

But the theme I wish to dwell upon here is one that the book’s back cover blurb only hints at: that of masks and mask wearing. The novel develops the theme of how we all wear masks, not just in front of others but also in front of the mirrors we look at ourselves in as well. Do we ever see our own faces in their natural form and color, and if so, when? What pushes us to rip away the mask and what do we find there, if anything at all? What happens when we show our true faces to ourselves and to others? What are the consequences of this potentially dangerous action, and are we ready to confront them and pay for our action?

In one of Patrick’s letters to his wife he directly remarks upon how he sees his brother after several years apart: “There’s something almost indecently vulnerable about him. You feel he’s utterly exposed. Even the thinnest mask, the one nearly all of us wear for decency, has been stripped off.” Patrick is naturally shocked because he has been lying to his wife, his mother, and Oliver. He is the one hiding behind a thick, heavy mask by keeping his affair with Tom a secret. Here Patrick indirectly notes that, for the safety of society and the progress of civilization, we all wear masks making us appear decent human beings, so as not to expose our natural, private selves to the public sphere, where our own desires may not be suitable and appropriate for the greater progress and peacekeeping of society.

As the story proceeds, Patrick’s ideas and behavior encourage Oliver to question his own purpose and reasons behind becoming a monk. At one point he writes in his diary, “Patrick can disturb me so terribly because he can make me question the way I live my life. . . . What I must keep reminding myself is that it’s I who give him this power. His power over me is nothing but my own doubt and weakness.”

But Oliver seems not to realize that it’s a two-way street: Patrick reacts to Oliver and is pulled in by his own actions and how he appears on the surface, and eventually causes him to react by continuing to lie to his wife, their mother, to Tom, and even to himself. Oliver questions him about whether Penelope and the children only represent the responsibility of a husband and father, and if so, tells him he should walk away from the marriage, “If she and the children only represent duty to you, . . . you ought to leave them. . . . But to live with them out of duty, that’s heartless. You’d much better go to Tom. Or are you afraid he might become a duty too?”

Eventually, Patrick decides to break it off with Tom and return fully to his wife and children. But if this will last is questionable, as he doesn’t completely disclose who Tom is to Penelope, and the reader wonders how long it will be before he meets another young man who will cause his own clearly bisexual, maybe even wholly homosexual, feelings to resurface and need fulfillment. He tells Oliver, “The one thing I’m concerned about is that I’m afraid you may be suffering from a very dangerous misunderstanding of yourself.” This may certainly be true. Patrick may feel this way about his brother, and as we see throughout the novel, Oliver begins to question himself before he finds a resolution with which he can be at peace, but this is something that Patrick seems unable and even unwilling to realize can also be said about himself.

A Meeting by the River is a sharp story that makes the reader question not just the brothers’ own words and deeds but also one’s own. Isherwood brings self-introspection to the surface and couches it in meaningful language, a fast-moving story, and characters whom one can be sympathetic toward even as they may be lying to themselves and others, because we have all done the same and will continue to because it is often easier to live with secrets and wear masks than it is to reveal our own hidden truths and desires to ourselves and others because we know there will be consequences that we do not want to face.